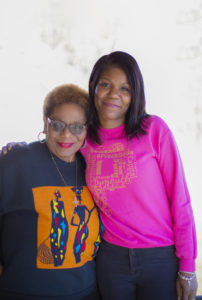 We use the words “Brilliant Detroit Family” quite often because that’s how we feel about all of you and all of the other participants, partners, donors, and volunteers who join us in the work of building kid success neighborhoods. We’re bound together. This connection is alive and well throughout Detroit and particularly in the relationship between Ora Williams, a Brightmoor neighborhood leader, and Rakisha Odom, a Brilliant Detroit staff member at the Brightmoor hub. Their relationship embodies a sense of trust and possibility.

Ms. Ora is a 40-year resident of the neighborhood on a mission to put the “Bright” back in Brightmoor. She worked as a case manager with the State of Michigan and has spent more than 15 years working with Brightmoor Alliance on the board and as a volunteer. Now she runs grandparent support classes. Everything she does is about bringing programs to empower people. Rakisha lives in the Morningside neighborhood on Detroit’s Eastside and has a passion for connecting families with resources, something she has excelled at with after-school programs, the United Way for Southeastern Michigan, and now Brilliant Detroit.

Rakisha describes Ms. Ora as “my advisor and go-to person. She knows everything that’s happening in the neighborhood and literally takes me by the hand to places I should be.” Ms. Ora smiles and responds: “I love Rakisha’s enthusiasm and passion. Even though she’s not originally from this community, she has embraced the community as hers. She has all these post-it notes with thoughts from nighttime that she brings back to the house in the morning. She’s amazing at loving on you, laughing, and taking away problems. She takes the job seriously and I love her dearly.”

They play off one another’s energy and together, with other volunteers and staff members, they are impacting the community. Since opening in March 2019, 125 families have participated in more than 2,500 hours of evidence-based education, health, and family support programming. These include BookNook, which offers high dosage literacy tutoring through an interactive, online program; Cooking Matters, which teaches parents how to cook healthy meals on a budget; and Building Early Emotional Support (BEES), which supports parents with social-emotional wellness programming for their children. Together, these programs support caregivers and children holistically, building kid success families and, eventually, entire kid success neighborhoods.

Both Ms. Ora and Rakisha are dreaming big. Ms. Ora believes that “Brilliant House is going to be just what the name says. There will be no house like the Brightmoor Brilliant House. The future will increase the number of people who come through and benefit from the programming and be a part of the community.” Rakisha adds, “I’m excited by how the community is taking ownership – cleaning up, helping to create things, involving themselves in collective child care. This will snowball into something huge. We’ll continue helping to bring communities together across the three block clubs on Vaughan, Kentfield, and Heyden Streets. We’ll also lead the way in building relationships with other groups, such as bridging the generation gap; mentoring younger moms and teaching them about resources; and utilizing fitness programs.”

Rachelle Morgan, the Community Engagement Manager at Brightmoor believes: “We’ll continue meeting the specific needs of the neighborhood and providing a blueprint for how community can be involved in change and supporting one another.” Jerry Williams, the Community Engagement Coordinator at Brightmoor closes with: “We’ll see the house grow and will believe in it. We’ll build buy-in to go further and go harder. Coming up as Ora’s son, I’ve been groomed to work in nonprofits, but I didn’t know I could do this community-building work until I became a part of it. Others can feel this too.”

These two have been brought into the fold in a large part because of Ms. Ora and Rakisha’s contagious energy and passion. The Brilliant Detroit Brightmoor hub is truly a family affair with everyone building off of the core, trusting relationships formed between Brilliant Detroit staff and our neighbors in that community. The people are unique to Brightmoor, but this story is not unusual. It is one we cultivate in all of the Detroit communities where we partner with caring families to create kid success neighborhoods.

Brilliant Detroit is a 501(c)(3) nonprofit organization dedicated to building kid success families and neighborhoods where families with children 0-8 have what they need to be school-ready, healthy, and stable.