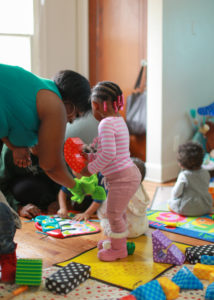 Something exciting is brewing in Detroit and across the country. Last year, representatives of Brilliant Detroit and the City of Detroit went to Providence, RI, where top early childhood education leaders gathered to talk about replicating the Providence Talks program. “Providence Talks proposes to do something never before attempted at the municipal level: to intervene at a critically early age, from birth to age four, to close the 30 million word gap at a city-wide scale and ensure that every child in Providence enters a kindergarten classroom ready to achieve at extraordinary levels.” This is so connected to the work of building kid success neighborhoods and, since the gathering, Brilliant Detroit and the City of Detroit have received a multi-year commitment of more than half a million dollars to replicate Providence Talks in Detroit. The replication will be called 313Speaks. 313Speaks will use a number of metrics to evaluate its effectiveness in increasing early language acquisition in children ages 0-3. The Language Environmental Analysis (LENA) Digital Language Pedometer technology is one tool 313Speaks will use to measure turn-taking in conversations between children and their caregivers.

313Speaks has completed a pilot phase with two cohorts of 313Speaks Playgroups at Brilliant Detroit’s Southwest and Springwells locations. These playgroups will help build critical early vocabulary and kindergarten readiness among Detroit’s children. 313Speaks has a coalition of amazing partners, including Black Family Development, Inc., Talking is Teaching, the City of Detroit, Everybody Ready, Wayne Children’s Healthcare Access Program, and Brilliant Detroit, and it is nestled within 313Reads: The Campaign for Grade Level Reading in Detroit. This allows it to align with other early childhood efforts aimed at improving literacy and building kid success.

Kyra Hudson, who is helping to coordinate the 313Speaks effort within the 313Reads campaign, is excited about the parent education and engagement that is already happening. A lot of people are looking to develop skills to talk with their babies and Kyra is able to see this engagement happen in real time as the 313Speaks effort continues to develop. For Kyra, success looks like as many parents as possible getting this information about building their children’s vocabulary. She says, “I want this program to be meaningful for parents” in a sea of other early childhood efforts. Overall, because of this work, more children will be ready for kindergarten, which is one of the greatest predictors of success later in life. 2020 promises to be a year of growth and energy, as we finalize partnerships, expand pilot sites beyond Brilliant Detroit hubs, and move toward population-level impact.

If you want to learn more or are excited to get involved, please reach out to us. Like the 313Speaks Facebook page, share communications, and spread the word. We have already had some really great volunteers, including those who help play with the children while parents learn the curriculum or help with logistics. At this stage of development, an early childhood background is important, but there will be more opportunities for broader groups of people to volunteer in the future.

Brilliant Detroit is a 501(c)(3) nonprofit organization dedicated to building kid success families and neighborhoods where families with children 0-8 have what they need to be school-ready, healthy, and stable.