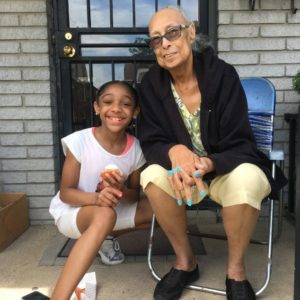 When we first walked through the house on 16919 Prairie Street in the Fitzgerald neighborhood, we were struck by how much help the house needed and how much possibility it held. What followed was many months of renovation to get Brilliant Detroit’s “palace” ready for programming. Before any programming took place, the house was filled with the love and energy of dozens of neighbors, who came together to paint, clean, arrange, and cook for themselves and other volunteers. Our Fitzgerald hub would not have been possible without their help. They were joined by dozens of volunteers from outside the neighborhood as well. Groups like Wayne State University School of Medicine, University of Detroit Mercy Alumni Association, and Talentei have all come through and left their mark on the hub.

This long but rewarding process ended on June 8th, when Brilliant Detroit officially opened the doors of the Fitzgerald neighborhood hub to the community! Around 300 people attended the Open House, many of whom were thrilled to learn about the programs coming to their neighborhood.

Carol Jordan, a Fitzgerald resident since the 1960s, says that her neighborhood has completely transformed over the years. She is amazed at its progress and believes that the Brilliant House will continue to help the neighborhood flourish. Carol’s granddaughter, Vivian (9), thinks that the Brilliant House will be a good place for kids to visit. She is excited for it because she says she often needs help with her homework after school.

Brilliant Detroit is grateful and excited to be a part of the Fitzgerald neighborhood and for the months and years of growing together ahead.